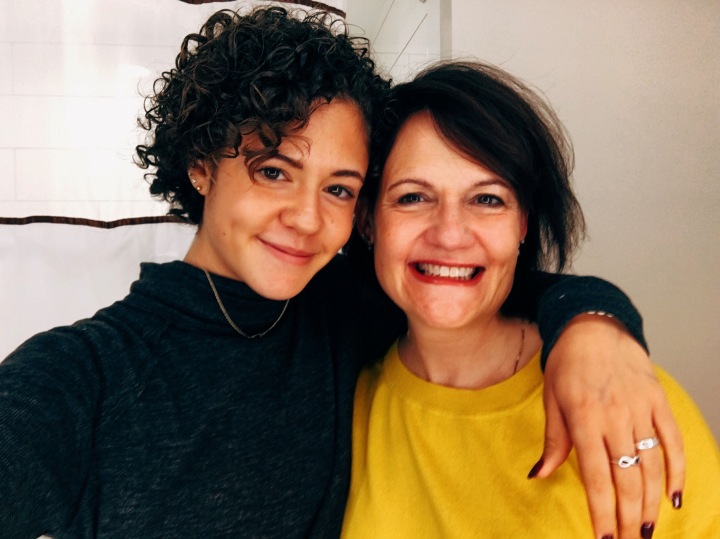 For years, I have told people, “Please don’t touch my hair.” For the first 18 years of my life, it was because I was embarrassed of it. For the past four years, it’s because I treasure it.

My hair grows out, not down. So, I spent hours throughout middle and high school straightening my hair, literally averaging three hours a night. I did the Brazilian treatment, I used straightening shampoo and conditioner, I pulled and yanked and pressed, I had three different straighteners (one for the scalp of my head, one that was infrared heat and one that had a brush built in). I dyed my hair blonder and blonder. I avoided getting it wet in the summer because I had an event the next day and I didn’t have time to re-straighten it. I added creams and chemicals and serums – I just so desperately wanted to have long, straight blonde hair.

I don’t quite know where this desire came from. I think part of it came from all the “pretty” girls in school looking like that. People always made comments like, “Wow, that’s quite a head of hair,” or, “You have so much hair.” I don’t understand looking back, but as an awkward girl who had crushes on boys that liked the other girls, and an awkward girl that looked up to celebrities and singers that had that pretty hair, I wanted anyone’s head but mine. I fought and I fought because deep down, I believed I would be satisfied if I had long, straight, blonde hair.

I never saw big curly hair being glorified and idolized, I saw it being a chore to take care of. I saw it as being different and weird. I could never find a hair stylist who knew who to handle my hair, unless I was straightening it. It was always sticking out in pictures and it was never easy to “just throw up” or “just shake out of a bun.” Once my hair was in its style for the day, that was it.

My freshman year of college, I shaved it all off. I went bald for St. Baldrick’s and donated as much as possible, but most of it was damaged from heat and chemicals and dyes. But, I raised enough money to pay for a child’s chemotherapy treatment for the coming year. And then, I was really different.

When I first signed up, I thought to myself, it’s just hair, and I really don’t like it anyway. I wanted to give back – there are people out there who don’t have hair and who would give anything to be in my position. If I’m not thankful, why not give it to someone who would be?

The experience shaving my head was life changing, and not in the 2007 Britney way.

There were doctors and families and cancer patients there at the location, all cheering on everyone who shaved their heads. I was one of three girls, but we were one of hundreds of locations across the country that month alone. Being part of something greater, knowing that there are other people out there with the same intentions, is such a humbling and moving experience. I realized, sitting in that chair, feeling the air hit one side of my scalp while the scissors and buzzer hit the other side, that there is so much more than the superficial appearance of hair.

There’s the human spirit, the spirit that wakes up one day and says, “I’m going to give my hair to someone else,” and, “I’m going to shave my head so when people ask why I’m bald, they can be pointed to a good cause and make a difference in a child’s life.”

And there’s the beauty that exists in every single one of us – bald, hairy, frizzy, curly, straight, glossy, mohawked, purple, braided, wavy and everything in between. There’s the uniqueness of every strand of hair that comes out of all 7 billion heads around the world.

And when we learn to embrace what we have instead of mourning what we don’t have, the beauty that shines is unmatched.

For 18 years, I wanted long, straight, blonde hair. I listened to people tell me they wish they had my curls, but I didn’t hear them.

When I was 19 years old, I was told that it was going to be hard to find anyone who was attracted to me because of my buzzcut.

At 7 years old, I would have cringed and wanted to melt into the floor when people reached for my hair.

At 22 years old, I can confidently say, “Please don’t touch my hair, I think it looks really good today and I don’t want to mess it up.”

Because lets be real, it does still frizz quite a bit 😉